The first work, Celosía XI (Hafsa Bint Al-Hayy) (2006) consists of seven terracotta screens that evoke the lattices in Arab architecture. Iglesias co-opts their traditional geometric patterns by incorporating words into the structure of the screens. Passing through the enclosures is akin to reading passages of text. The title refers to the celebrated Andalusian poet Ḥafṣa bint al-Ḥājj ar-Rakūniyya (1135–1191).

The immersive installation Vegetation Room III (2005) is a defined architectural space. The interior walls are casts of organic vegetation. The combination of natural and architectural elements complements the aims of the Sainsbury Centre Sculpture Park: to bring together art, architecture and the natural environment.

This display reunites the work of Cristina Iglesias and Norman Foster, who have collaborated on a number of projects. Iglesias’ sculpture can be seen in front of the Bloomberg Headquarters, London, which was designed by Norman Foster. She has also created a canopy for the façade of the Norman Foster Foundation in Madrid.

Both works are free to view on the West Lawn as part of the Sculpture Park. A trail map is available here.

In collaboration with Marian Goodman Gallery and Cristina Iglesias Studio. 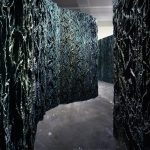 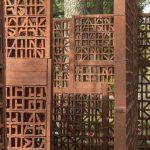 The Sculpture Park surrounds the award-winning Norman-Foster designed Sainsbury Centre building at the UEA campus. Set within the 350 acres of parkland featuring outstanding art, architecture and natural beauty, it is open daily during daylight for all visitors to enjoy. Donate to our Sculpture Park and become a Sculpture Star.

The Sainsbury Centre’s Sculpture Park is home to art, wildlife and endless opportunities for all who visit

Anish Kapoor is one of the most important sculptors working today and internationally recognised. Two works are currently on display in the East End.